Public debt is always a hot topic in Washington DC. Does the national debt matter? How much is too much?

When used correctly, public debt can be extremely beneficial, leading to a better quality of life for Americans. Public debt can be used to finance construction of new roads, provide healthcare to citizens, invest in the military, and more. But national debt affects the economy in both positive and negative ways. When unchecked, public debt has the potential to lead to an economic downturn. Let’s look at the subject of the U.S. public debt and the future of the economy.

What Is Public Debt?

Does the national debt matter? Is the national debt a problem? Before we can answer these questions, let’s first answer a more fundamental one: “What is public debt?” For the sake of this article, our operating public debt definition is: “how much a country owes to lenders outside of itself.” Lenders can be individuals – both domestic and foreign – or businesses or foreign governments.

Every year, the total deficit is added to the current debt. The U.S. adds to its public debt by issuing government bonds. For example, the U.S. national debt increases when the U.S. decides to issue $1B in new 10-year treasury notes. Let’s say the notes pay an interest rate of 3%. The Chinese government, finding that it has some extra cash that it wants to invest in a low-risk way, can buy these bonds. Now, the U.S. has $1B to spend how it pleases at a relatively low interest rate of 3% per year.

Today, the U.S. national debt is over $28 trillion. Why would the government want to have such a high debt? Public debt is used to finance many things that raise the standard of living without increasing taxes. For example, public debt is used for infrastructure projects that maintain roads and bridges. It can finance services like public education and healthcare. Pensions for government employees and defense spending can be delivered by issuing government bonds.

Many politicians would prefer to increase the public debt rather than increase taxes. This was the choice made in 2017 when the Tax Cut and Jobs Act was passed. However, according to many economists who study macroeconomics, when public debt increases to over 77% of GDP, national debt affects the economy negatively. Public debt begins to slow growth by increasing interest rates. This makes it more expensive and sometimes harder to borrow money. Over the past 10 years, the U.S. public debt has grown rapidly and is expected to grow to 95% of GDP by 2029. 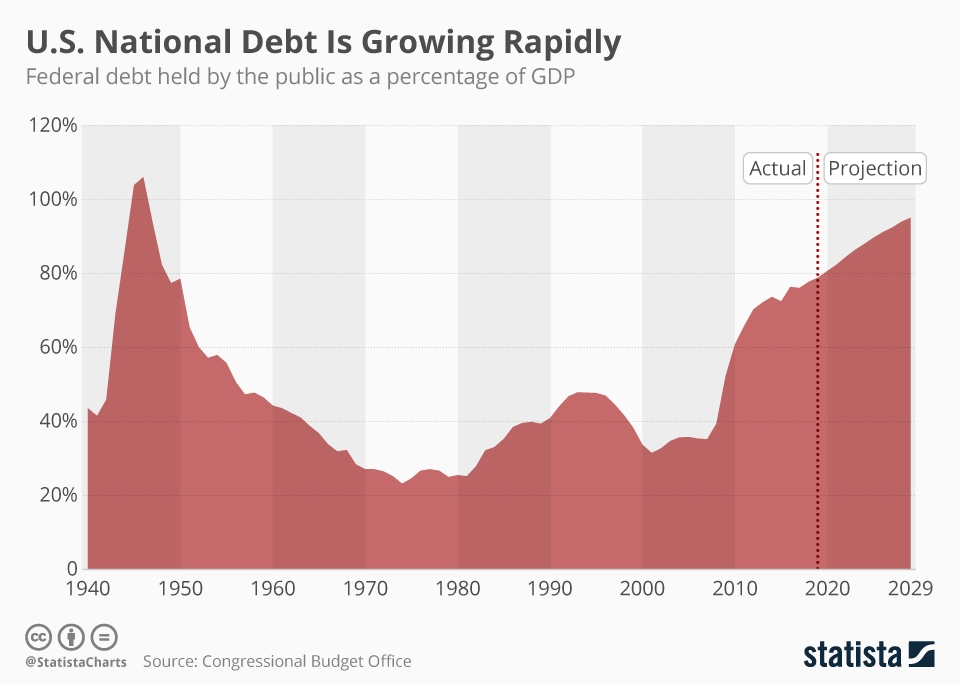 You will find more infographics at Statista

What Risk Is Public Debt to The U.S. Economy?

Does the national debt matter? It can. When the public debt-to-GDP ratio increases to over 77% of GDP, interest rates can rise. This can lead to more costly public debt and for investors to view public debt as risky. All of this means that less public debt would be available in the future to stimulate the economy. Or, it might still be available, but it would just be more expensive to access. This could result in the following:

One of the major goals of public debt is to finance infrastructure and other public programs. However, if the debt is too high as a result of accumulated deficits, then the government cannot take out additional debt to finance needed projects.

If the public debt is too high, investors may not want to invest in public bonds. They would view the investment as too risky and invest in private companies instead. This creates a negative feedback loop where interest rates need to rise, i.e., the cost of public debt goes up to attract more investment. Then, each year, more tax receipts go to paying interest instead of providing services.

Public debt also finances disaster recovery services. If a disaster happens and the debt-to-GDP ratio is high, it would be costly for the government to take out debt to finance repairs. The hurricane in Puerto Rico was a good example of this situation. The local Puerto Rican government already had a public debt issue, and the hurricane recovery effort put a huge strain on the situation.

The Social Security Administration (SSA) is the largest holder of U.S. public debt. It owns about 13% ($2.9 trillion) of the debt. How and why? When U.S. citizens pay social security taxes, the money is not kept compartmentalized and siloed for the sole purpose of providing social security benefits. Instead, the SSA invests in government bonds, and agrees to get the money back, with interest, in the future. What the government is essentially doing is simply combining income tax receipts with social security tax receipts and other tax receipts to provide services. It takes out loans, i.e., issues public debt, if there isn’t enough cash in aggregate for all of the services it wants to provide.

The fact that the SSA owns $2.9T of public debt doesn’t mean that the program is so well funded that it can make investments instead of paying for benefits. Instead, it just reflects the mechanism by which SSA tax receipts are used to finance other types of spending. So, senior citizens today will get their social security benefits. And they will tomorrow too. Social security payments are just one of the many critical services the government must provide. If necessary, they will issue more debt to provide for them. Ultimately, the problem is that the steady increase in public debt may mean, at some point, higher interest rates.

Finally, if the U.S. government has trouble paying its bills, including interest on public debt, it could just print more money. But of course, this leads to inflation – also not good for the economy.

Public debt is a good way for countries to fund infrastructure and other public services. However, it does need to be balanced with other financial methods, such as controlled spending and taxation. When done correctly, a moderate public debt can stimulate the economy and drive growth that leads to a better quality of life for all.