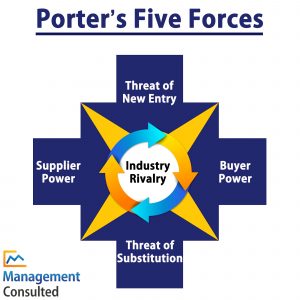 This force focuses on the quality and the quantity of competition within an industry. A larger number of notable competitors usually means that the industry is more challenging to succeed in. In particular, suppliers, buyers, and customers have more options and therefore more leverage. Competitors may be forced to lower prices and thus decrease their profitability. On the other hand, if there aren’t many competitors, companies are able to act more freely and charge more for their products and services. This results in higher revenue and profits.

The ease with which new companies are able to enter an industry is another one of Porter’s Five Forces. The more barriers to entry that make it difficult to enter an industry, the more power existing companies in the industry have. These barriers to entry could include things like the amount of capital it takes to start a business in the industry or proprietary technology that is protected by patents. Conversely, industries that are easy to enter mean that most companies will die out and only the strongest will survive.

Customers always play a large role in any industry. This force is dependent on how many customers a company has, how important each customer is, and how challenging it would be for companies to find new customers. Interestingly, a company with a large number of smaller, independent customers will have more leverage in charging higher prices to increase profitability. Conversely, a smaller and more powerful set of customers implies that each customer has more leverage in negotiating better prices, thus resulting in less profits.

This force refers to similar products or services that can be purchased in substitution of what a company currently offers in the market. An absence of substitutions means that customers will have little choice but to purchase a company’s products or services. This gives companies in that industry more leverage to charge higher prices, thus increasing profitability. A large number of substitutions means that companies will lose share to other products and services in the market, resulting in lower price points and profits.

This force measures the leverage and power suppliers have in an industry. The quality and quantity of suppliers in an industry are often determined by the type of supplies themselves. However, supplies can be unique and hard to create or simple and commodities. With more quality suppliers in an industry, there is more competition amongst them to serve the largest competitors. In such a case, suppliers have less leverage especially if it does not cost much for companies to switch suppliers. On the other hand, with fewer suppliers, the more companies will need to pay given that they hold less leverage in negotiations, thus decreasing profits.

Despite the popularity of Porter’s Five Forces, you should not use the model directly when creating case interview frameworks. Interviewers will think you are copying rather than creating a framework catered to your case. More importantly, the framework probably wouldn’t even be enough to fully crack the case anyhow. Plus, Porter’s Five Forces will not be used in all business case situations.

Why? Porter’s Five Forces mostly address competitive challenges. Trust us – many of the challenges businesses face are internal, not external. Companies – even established Fortune 500 companies – are quick to blame competitors, but the blame usually lies within. More importantly, the solutions to a company’s problems are almost always internal.

In addition, cases expect data, and one weakness of Porter’s Five Forces is that it does not clearly lay out a single calculation or a metric for each of the Forces. Because of that, using them verbatim will leave a clarity gap.

For example – when you say, “Buyer Power” is the issue, it sounds like you’re parroting Michael Porter. But when you say, “I’m interested in how much buyer consolidation there is – what % of volume or revenue come from our top 10 buyers” – that is a better metric to use in a case interview.

Because of this, Porter’s Five Forces can be a helpful way for you to think about an industry and its key players while you create your framework. Try to think about things like the level of competition, quality of customers, potential substitutions, and the leverage suppliers hold. The key to using Porter’s Five Forces in an interview is using only the ones that are relevant or important to the case.

Would you like more information about Porter’s Five Forces directly from Michael Porter himself? Read the book – or at least put it on your work bookshelf. It will impress the heck out of someone – we’re sure of it. 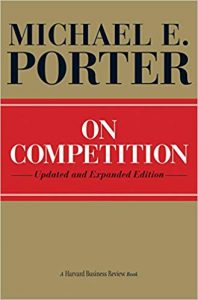