Networking 101- how to network for management consulting jobs is extremely important in actually landing an offer. You could be the next Jack Welch, but if you don’t know how to network, you won’t make it very far. Networking allows you to get in front of decision makers and show your acumen. 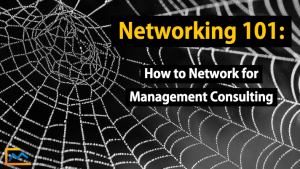 Listen to Jenny Rae as she teaches you networking tips and how to network for management consulting jobs.

Networking 101: How To Network For Management Consulting YouTube Transcript:

Hi I’m Jenny Rae, Managing Director of Management Consulted. I’m here today to talk to you about the importance of networking and how to network for consulting. I’m introducing a series that we’re doing about networking and I’m going to give you some high-level insight today about some of the keys to networking for consulting. How to do it and what’s important about it. Specifically I want to talk about two key things.

Two Things with Networking for Consulting:

First of all, it’s generally accepted that the most senior people inside consulting firms are the most influential when it comes to the actual recruiting process. There is some truth to that, but it’s really only true once you have a contact with somebody already established. The most senior people in the firm are focused on bringing in new business. They are not focused on establishing the core of the firm or making sure that everything is running smoothly. So they are actually the most distanced from the recruiting process. It’s not like they’re not involved entirely, it’s just that they’re not likely to get involved for you if you don’t already know them.

Now, if they’re a neighbor or a friend of a friend or someone that you actually already have a contact with, by all means utilize them. They can almost guarantee that you’ll get an interview. That’s of course if they like you and think you would be a good fit. However, for the most part, the junior people in consulting are your greatest assets.

Ways To Break Into Consulting

Now, there are two ways that you can break into consulting. One is through target recruiting, usually on cycle at a target school. The second is through off cycle recruiting. When you’re going in either as an experienced hire, or off the normal timeline for recruiting. For both of them, it’s really important that you’re focused on advocating your position or your ability to do the job. You’re a consultant to the people who are just one level ahead of you in consulting. The key focus here is making sure that the people who actually will be sitting in a resume review, if you’re from a target school or who will be referring you through the online system, are the ones who are the most active in the process.

Now, in the middle of the slide we actually have recruiters, and I want to make sure that you understand a couple things about recruiters here. First of all, recruiters are powerful but they’re not necessarily powerful in the way you might think. They’re powerful in that they serve as gatekeepers — trusted gatekeepers of consulting firms. So for anyone who is not likely to be successful in the process, a recruiter will exclude them throughout the rest of the process. A recruiter will not advocate for you and a recruiter cannot make the decision to hire you or to interview you. So in general, when you’re building advocates inside the firm you actually want to go around the recruiters because they can only exclude you from the process, they cannot help you necessarily get into the process or be successful as you go.

Get In The Door

What it will feel like to someone who is receiving this will be that you are the type of person who’s being strategic about your own choices. You’re the type of person who probably has many options and you want to understand what the options are and the type of person who’s preparing for your fit interview. Later in your fit interview, the firm and more representatives from the firm will ultimately ask you why are you interested in working for this company. If you’re doing the second thing — if you’re asking good questions about the company and really getting informed — you’re going to be able to utilize the research that you’ve done in order to have really savvy answers.

So in summary, it’s important to understand both who you’re networking with, and also how to network in two steps, both getting in the door and making sure that you’re doing your research. Now, if you have more information and more questions that you’re interested in, we offer a Networking Bible which has step-by-step instructions on how to network in consulting as well as the key database of 110 firms. On top of this, we also have interesting information and articles on our website and you can always contact us if you have questions.