Bain reviews on Glassdoor can be very enlightening – even the laughable negative ones. While bordering on the absurd, these Bain Glassdoor 1 star reviews can serve as windows into the company culture, management issues, and hint at legitimate problems to be aware of if considering Bain as a career option. But also, they can honestly be hilarious. Listen to Jenny Rae as she unpacks, sometimes rather humorously, these Bain Glassdoor 1 star reviews. 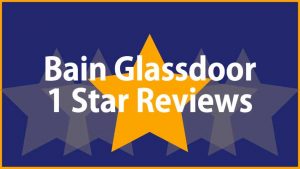 I’ve gotten to thinking recently, we talked a lot about how great consulting firms are, but the juicy stuff, the real information is actually in talking about how terrible some things are about them. So I went to the obvious place to look, which was Glassdoor, and filtered by one-star reviews. Man, these Bain reviews are a hot mess. I’m just gonna read a couple of these excerpts for you for Bain, because there’s a real story inside here. I think you’ll pick it up as we go.

Here’s what one of the first Bain reviews said, I’m probably gonna die as I’m talking through these. This is, “I worked at Bain and Company full time, the pros are – I’m a true believer that for many BCG is the best consulting firm out there. So, either this person has no idea what they’re talking about and they didn’t work for Bain, or they’re just being harsh and rude – just saying that one of the main competitors of Bain is one of the best consulting firms out there. Also, I just love how that was a pro, which is awkward.

But then also the cons – also “all the normal ones for a consulting firm”– nobody explains what these are, do you just assume that certain things are terrible? But great culture and improvements to work/life balance are generally beyond where the competitors are. I don’t think this person understands how the review system works – still entertaining to read nonetheless.

Become A “Bainie” Or Else…

Here’s another Bain review. So I worked at Bain & Company full-time, more than three years. Some pros – strong culture, the Bain way of doing things. Cons – the Bain way is the only way. Also Bain is number one, two, and three priority, and you have to become a Bainie. I’m not really sure what you are if you don’t become a Bainie if you’re working for Bain. Really confusing to me.

Also, there is negative bashing of competitors on events in meetings, all to uphold Bain and to strengthen culture – that’s normal, P.S. Also, you know, some real true awkward things, but buried in here, the women’s agenda is way behind. There’s a fair share female partners, but no real role models, or female partners with power. A not entirely true, but also an interesting point, certainly meritorious if it is an issue. But in general just basically talking about how they felt like they were expected to get excited about working at the company that they had chosen to work for. So again awkward, right?

Here’s another one. One-star, “typical consulting firm.” Some pros – a good brand name which can help the career, great people, mostly smart and family motivated. I love these, I think these these pros are fantastic, right? And then the cons – rigid structure, need to follow the development plan and career path lead out by the firm. I’m not entirely clear what career path you would follow, if not the one laid out by the firm. So these Bain reviews are just, in general, slightly unrealistic. Also, the skills required at all levels are different. So someone who is a great analyst will not make a good manager. That is true, but not a con. So again a really confusing review to me.

Here’s another one. I love the title for this one, “Bain Dubai = Azkaban + hunger games + Mordor.” This is expected to be intense. Again, the pros –pretty great right, super tight-knit culture, high growth opportunities. But the cons are just amazing – super high turnover, again, standard for consulting. Management struggling to get enough consultants to staff their project. There are people begging to work for places like Bain. Management care a little about your development or work-life balance. You know, maybe true, maybe not true. But again, I’m not sure how that makes it Hunger Games or Mordor. So I love the drama.

Alright, just a couple more. These Bain reviews are so good. By the way, if you just go read them, you’ll find yourself in a black hole of time. It’s amazing. I’ve been working at being full-time for more than a year. The pros – ability to get an interview almost anywhere after. I would say that’s a huge pro of working for the firm. but then the cons – long hours, always on call for trivial tasks. Okay fair. Work for a new MBA instead of a more experienced manager or partner. This is my favorite – I’m seeing so many people cry at work in under two years here, and within a year, almost everyone wants to quit. There is a lot of turnover, there are reasons for it. And then in addition, people at the top, partners, are essentially sales people, so a very sales organization. Then this is harsh at the end. There’s a reason this is the number three consulting firm.

By the way, it is the number three consulting firm by size, but not necessarily by rankings, because it depends entirely on what you look at. But there’s the reason this is the number three consulting firm – stop having new MBAs from less than top tier schools. Not even sure what that means, but it’s really harsh. Managed talented undergrads from top-tier schools, which I’m guessing this person is a talented undergrad. I wish I had interviewed with BCG and McKinsey, as they seem to know how to better nurture top talent.

The Paycheck Does Not Bounce

Love the drama. And then the final Bain review, this is my favorite pro – the paycheck does not bounce – true, true, and true, probably never will. But the cons – for the past several years we hear the firm is growing over ten percent, why are budgets squeezed so hard.

So I just think, at the end of the day, when I look through all of these Bain reviews – and there are more of them for all the firms, in reality there’s only a couple, a handful of these fun star reviews, for all of the glowing reviews of the firms. So when you put it all together, what really ends up coming out of this is that a lot of people realize when you’re in consulting for a year, that the marketing pitch of flying first-class and spending your time at happy hours isn’t all that consulting is cut out to be. It’s a lot of hard work, and a very political environment. And what do you put all that together, and you realize that that’s what they’re saying, I think these 1 star reviews are actually talking about some really amazing things at these consulting firms. Hope you enjoyed.