It’s important to understand how your case interview rounds will be structured. The Case Interview has distinct rounds with different purposes – it’s a lot tougher 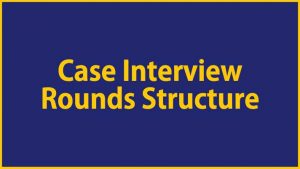 to prepare if you don’t know what to expect. Listen to Jenny Rae as she expertly breaks down each of the three rounds in a standard case interview, lays out the purpose for each, and explains how how consulting firms evaluate you in each case interview round.

There are three rounds of a standard case interview.

Second, there’s round one. Which is the standard first round of the interview. It can be conducted either in office or on campus or on Skype.

And finally, the second round interview which is almost always conducted in the office with the exception, of a few offices that will bring interviewers to a localized place. Such as the Greater China offices that will interview in the United States. They will fly people to Boston or to Chicago or to another place, in order to conduct all of the final round interviews. So they’ll bring the interviewer team instead of bringing the interviews to the office.

Let me break down what happens in each one of these interview rounds, so that you can understand when you’re preparing for a case interview, how best to succeed.

For round zero, round zero is a screaming round. Round zero is a round that is evaluative. So it’s not just you have a buddy who’s offering to do a case interview with you, but it’s usually conducted by either HR, or by someone who is more junior in the firm. And their goal is to identify if you are a definite no. And there are a couple of ways that they figure this out. First of all, they try to ask you some basic questions that you’ll get inside the interview. You might get a market sizing question, or a simple math question.

But you also will get a number of the fit questions. “Why consulting?”, “Why this firm?”, “Why this office?”, and if your answers are too long or too unfocused, they’re not going to take you on, into the next round of the case interview. In addition if they don’t think do you have executive presence which is more intangible measure of your fit with a firm, then they won’t take you to the next round. But in reality, about 80% of people passed round zero. And they pass because they do have good experience, they have experience interviewing, and they’re prepared. If that’s not you, you need to make sure that you’re doubly prepared. So if you don’t fit all of those categories, make sure you’re ready to go for round zero of the case interview.

For round one, that’s the big cutoff period. Only about 30% of people make it from round one to round two. And then sometimes it’s even a smaller number. So at Bain, we would take for example, about 60 people, and of those 60 people that went into the first round, we would take maybe 12 to final rounds- maybe 20. But it was not anywhere higher than that. So that 12 to 20 number really represented a big cut off in that round. And that is basically where we say not only can you do a case interview, but also can you do a case interview in a way that is relevant to our firm. And that’s the basic test. Usually you’ll have two interviews in that round, and like I said before, it will be on campus. If you’re doing on campus hiring, or the team of interviewers will come to you, or it will be at the firm’s offices. If you are doing it as an experience higher and you’re in the same city. Or, it will be on the phone, if you’re not in the same city.

The final round, round two, is where everything comes together and offers or handed out. About 50% of people that go into round two get offers. 40% to 50% depending on the firm, but really ultimately, it’s about 50%. At this point it’s been determined that you can do a case. Which means, you could do the work. What they’re gonna test in round two is the advanced decision-making. So they’re going to push on certain key areas of your analytics. They’re going to push on insights. They’re going to give you more graphs, more charts, and more pressure in the second round interview to see how you handle it.

And finally they’re gonna ask a lot more fit questions, more advanced, more honest, and more detailed fit questions. And the interviewers, usually partners in that round, are going to have authority over whether they would want you on a team of theirs. In fact, at Bain in particular, the common question that was asked was, “Would you accept this person on their first project on the job?”. If their answer was “Yes.”, then you got a thumbs up. You had a recommendation for hire. If the answer was “No.”, you got a thumbs down. And if the answer was, “I haven’t quite seen enough. I think they could get there, but I’m not sure.” Then you were usually held off until the end of the day, where some people got offers immediately, some people didn’t get offers immediately. And then they looked their hiring targets.

So ultimately depending on the round that you’re going into of your case interview – round zero, round one, or round two, you want to make sure that you’re prepared for what’s to come. If you have questions about expert case interview coaching, we would love to help.